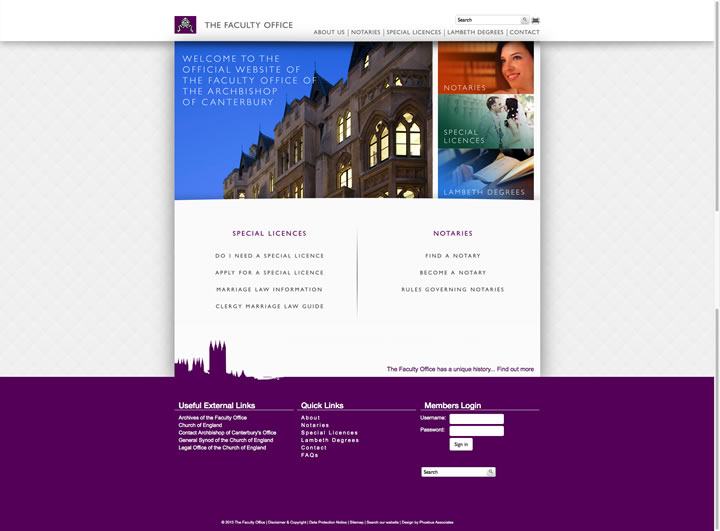 About The Faculty Office & Our History

The Faculty Office has its origins in the Ecclesiastical Licences Act 1533. This Act transferred to the Archbishop of Canterbury the power to grant “all maner licences, dispensacions, faculties, composicions, delegacies, rescriptes, instrumentes or wrytynges have byn accustomed to be had at the see of Rome”. The Act created a new court – the Court of Faculties – and provided for the appointment of a Judge to preside over it.  This jurisdiction was to be administered by the Archbishop’s “comissarye” assisted by a “clerke”. The issue of Special Marriage Licences and the appointment of Notaries Public were, before the Reformation, functions carried out by the Pope or the Papal Legates. For this reason, the functions under the Act are sometimes referred to as the “legatine powers”.  The powers are more constitutional than ecclesiastical in the modern sense of that word.

Today the Faculty Office is presided over by the Master of the Faculties (as the “comissarye” is now styled) and its day to day administration is the responsibility of the Registrar (a post currently held jointly). Enquiries about Notaries and Special Licences should be sent to the Registrar of the Faculty Office rather than to the Archbishop. The functions of the Faculty Office extend to both England and Wales (and, in the case of Notaries, further afield).  Those functions are now threefold: the issue of Special Marriage Licences, the regulation of the Notarial profession and the legal work for the awarding by the Archbishop of “Lambeth” Degrees.

Seal of The Faculty Office

This seal is attached to the ‘faculties’ which the Faculty Office issues: Notarial faculties (the document which appoints a Notary), Special Marriage Licences and Lambeth Degrees. It has been used since the time of Archbishop Cranmer in the reign of Henry VIII.

On one side of the Seal is a representation of Moses lifting up the brazen serpent, with the motto ‘Mundus transit’ and the Arms of the See of Canterbury.

The reverse side shows a representation of Christ’s Crucifixion with St John. In Latin is a quotation from St John’s Gospel (Chapter 17 verse 3), which translates as: ‘And this is life eternal, that they might know thee the only true God, and Jesus Christ whom thou hast sent’.